Set between the Pacific and Atlantic oceans and surrounded by tropical rainforests, it’s no wonder that Costa Rica – momondo’s Destination of the month – boasts the best beaches in the world!

You don’t have to love the beach to love Costa Rica, but – with nearly 300 of them hugging the country’s coastline – it certainly helps. People come from all over during the November-April dry season to experience the surf, saunter and sun this tropical Central American land has on offer.

So, where should you park your towel? Here’s our run-down of the best Costa Rican beaches you simply must visit! 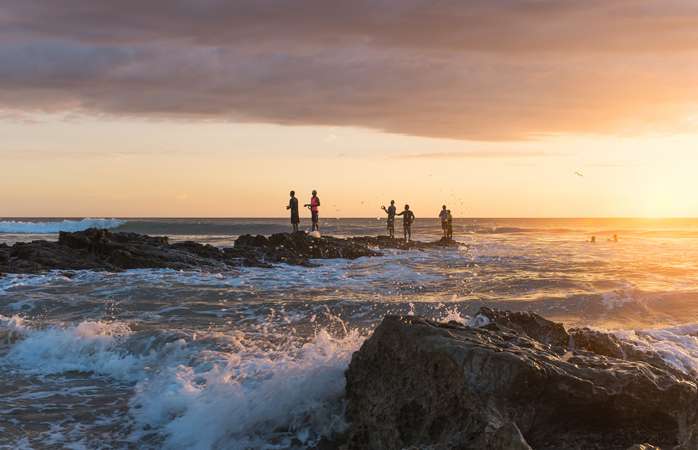 Despite the influx of tourism that has swept the Nicoya Peninsula of late, Playa Santa Teresa maintains a folksy, simple charm. You’ll still find ‘ticos’ (an affectionate term for native Costa Ricans) trawling Teresa’s coast and firing up the grill to serve hungry beach loungers the fresh catches of the day.

The consistent off-shore winds mean that Playa Santa Teresa offers some of the best surf in all of Central America. If the waves are too fierce, you can always embrace your inner Tarzan with a canopy tour through the jungle that neighbors the gorgeous beachfront. 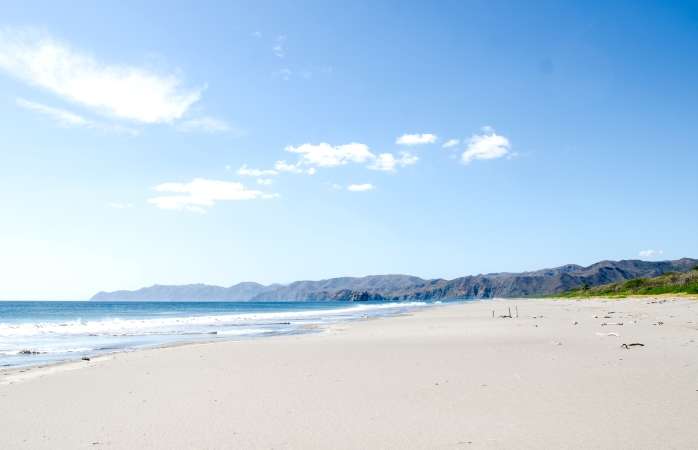 You won’t find a whiter sandy beach than the criminally overlooked Playa Naranjo, aka the pristine pearl of the Gulf of Papagayo.

Situated in the northwestern Guanacaste province alongside the brimming metropolis Liberia, this secluded beach is a place to visit when you want to escape the chaos of the world outside and check-in with Mother Earth.

Behind the beachfront you’ll be tempted by the allure of the Santa Rosa National Park. Launched in 1791, it’s the oldest conservation area of its kind in the whole country, offering a look into north Costa Rica’s unique ecosystem, as well as the many tropical flora, birds and sloths that call it home…

As will you! With no hotels in sight, if you want to experience these out of this world wonders you’ll have to pitch a tent in one of the park’s many well-serviced camping sites. 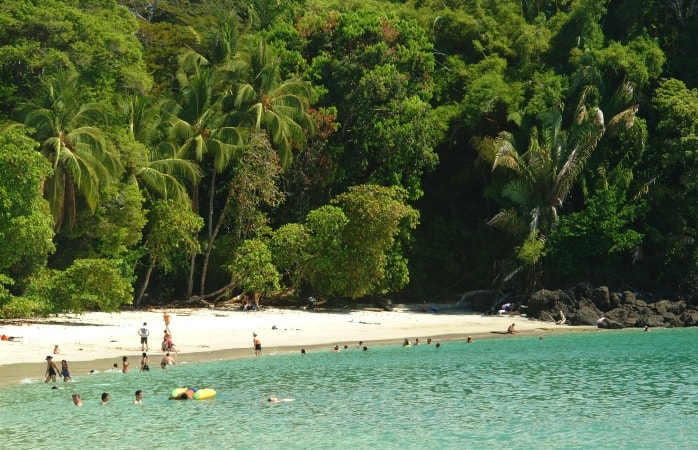 Only a few hours away from the San José airport, and known as one of the country’s most cherished tourism spots, visitation to the park is limited to 600 people on the weekdays and 800 on weekends. Not only does this mean that the exotic wildlife – including iguanas, sloths and endangered squirrel monkeys – are able to live in relative solitude, but that the almond tree-lined beaches themselves are free from the herds of boisterous sun-hunters.

Extra tip: by nightfall, take the 4.5 mile ATV ride north along the coast to the buzzing village of Quepos, home to Costa Rica’s progressive foodie and beach-bar club scene. 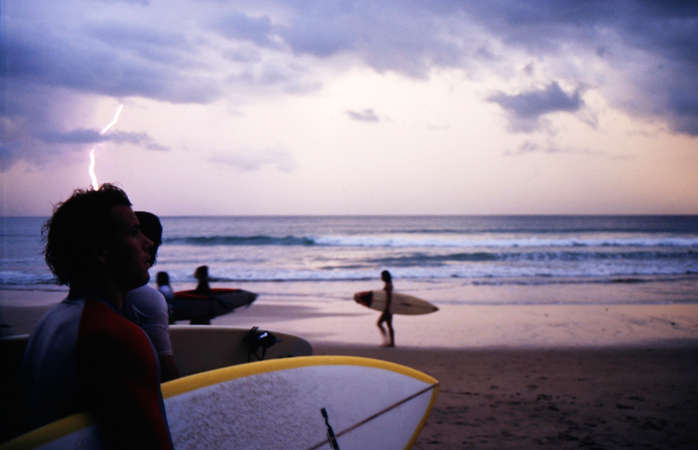 Forget the all-year-round 20-foot high waves, the reason you need to visit this sandy shore is for the legend of a 400 kg pig called Lola.

This little porker was once the star of this pleasant beach strip in Guanacaste, and could be found either propped up next to the cocktail-flushed Lola’s beach bar, wandering around the surf school or taking a dip herself in the Avellana’s azure waters.

Lola is long gone, but in her wake comes a new heir to the piggy-throne in the form of Lolita, whose presence helps give Playa Avellana an eccentric, and infectiously fun-loving atmosphere.

Simply put, it’s Costa Rica’s most friendly beach. Join the community of surfers, expatriates and wandering travellers basking in the glory of the sun that seems to never stop shining on this part of the Golden Coast. 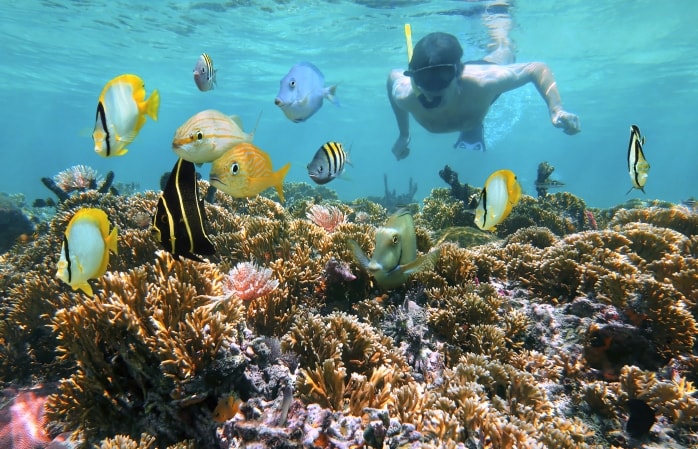 Just a 30-minute boat trip from Flamingo, the 20-islands that make up the Catalina “Cats” archipelago are so much more than a bit of nice sand and sun. With relatively placid waves crashing into the craggy shoreline, what people really come to the Cats Islands for is to dive in and discover what is lurking beneath the indigo ocean surface.

Back above land, the Cats offer a mixture of unspoilt sand and pebble beaches that are great for trekking. Just watch out for the hundreds of sea turtles that are known to rest and lay their eggs here. 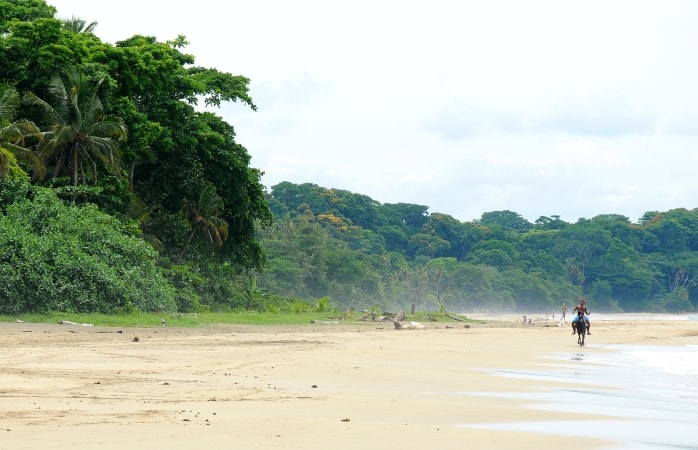 Where can you go lounge by the beach in the morning, venture out on chocolate plantation tourover lunch, explore a butterfly habitat in the afternoon, go for a beach horseback ride in the early evening and go clubbing in your flip-flops in the evening? It could only be Puerto Viejo.

It rains a lot more here in the eastern part of Costa Rica, which lends to the luscious rainforests provided by the Cahuita and Manzanillo National Parks and neighboring coastline.

Sure, the beaches are pearly white, the water is warm and the 20-foot surf is gnarly, but the best element about Puerto Viejo’s coast are the people living here. A population medley that sees Afro-Caribbean communities, Indians, ticos and the indigenous Bribri peoples living side by side in harmony, all sharing a love for the land they call home.